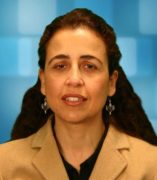 Important note: The computer science department is saddened to announce the passing of Isabel Cruz, distinguished professor of computer science, in September 2021. Her web profile remains for now as a tribute to her contributions to the department. Below is her faculty bio as she wrote it.

The following is OLD content (to be updated). Please disregard and instead go here.

I joined the faculty of the Department of Computer Science at UIC in 2001. My main areas of research include data science/big data, databases, geographic information systems, semantic web, information visualization, and computer security. Current and past topics of research include information extraction and matching, big data (e.g., for geographical and biomedical information), visual analytics, context-aware role-based access control, data linking for urban resilience and sustainability, graph query languages, and constraint-based graph drawing. I direct the ADVIS Lab. Here is my biosketch. Here are my publications: Google Scholar, DBLP.

Isabel F. Cruz is Professor of Computer Science in the College of Engineering at the University of Illinois at Chicago. She holds PhD and MS degrees in Computer Science from the University of Toronto [*]. In 1996 she received the National Science Foundation CAREER Award, in 2000 the best paper award at the IEEE Symposium on Visual Languages, in 2005 the College of Engineering Faculty Research Award, in 2009 the Great Cities Institute Faculty Scholar Award, and in 2011 the University of Illinois Faculty Scholar Award. She received several other awards for research, teaching, and service, including a Government of Canada Award for research, the Teaching Recognition Program Award from the UIC Council for Excellence in Teaching and Learning, and the Association for Computing Machinery Recognition of Service Award (1998 and 2013). She has been invited to give more than 60 talks worldwide and has more than 120 refereed publications in databases, geographic information systems, semantic web, visual languages, graph drawing, user interfaces, multimedia, information retrieval, and security.

She directs the Advances in Data, Visual, and Information Science (ADVIS) Research Lab, which has been funded by the National Science Foundation since 1996. In addition, she has been funded by the Department of Defense, NATO, CRA, and corporate gifts. She has graduated 20 students in their PhD and Master theses. She works regularly with undergraduate students and has co-authored papers with 15 of them. The broader impact of her research has been demonstrated in several real-world scenarios, including biomedical and geospatial interdisciplinary applications, and in many teaching innovations.

She has edited 19 journals and books, including, respectively, the ACM SIGMOD Digital Symposium Collection (as Founding Editor since 1998) and The Emerging Semantic Web (2002). Her advisory activities have comprised the steering of six scientific organizations, including ACM GIS and participation on several strategic planning initiatives, including the Mapping Science Committee of the National Academies (2004-2006) and of the NSF workshops on Geo-Spatial and Geo-Temporal Informatics (January 2009), on Data and Applications Security (February 2009), and on Confidential Data Collection for Innovation Analysis in Organizations (co-chair, September 2009).

She was the WISEST (Women in Science and Engineering System Transformation) facilitator for the Department of Computer Science (2003-2012) and the Head Facilitator (elected) in 2010-2011. The goal of WISEST is to increase the number, participation and leadership status of women in academic science and engineering through institutional transformation at UIC. The WISEST program was funded by two NSF ADVANCE grants (2003-2006, 2006-2012). Other leadership roles at UIC include being chair of the CS faculty search committee, member of the dean of engineering search committee twice, member of the College of Engineering executive committee, and member of the Provost's Sustainability Strategic Thinking Advisory Committee (SSTAC) since its inception (Fall 2012).

Seminar - Juan F. Sequeda: "Integrating Relational Databases with the Semantic Web" (November 2015)
Visit by ADVIS alumn Venkat Raghavan to CS586 and the ADVIS Lab as part of the IBM Watson visit to UIC (October 2015)
AgreementMakerLight: (again) best ontology matching system at OAEI! (October 2015)
The ADVIS Lab has four presentations at ISWC: two at the Voila! Workshop and two at the Ontology Matching Workshop (October 2015)
Keynote at NSF funded workshop at the University of Michigan (October 2015)
UIC CS Data Science Curriculum: Introduction to Data Science course to be offered for the first time in Spring of 2016! (September 2015)
UIC CS Data Science Curriculum: Data and Web Semantics graduate course is offered for the 11th time!(August 2015)
Congratulations to PhD student Iman Mirrezaei for best paper at Know@LOD: The Triplex Approach for Recognizing Semantic Relations from Noun Phrases, Appositions, and Adjectives (July 2015)
Isabel Cruz gives keynote talk at the 8th AGILE International Conference on Geographic Information Science titled "Big Data Integration to Enable Citizen Participation in Smart Cities" (June 2015)
Ning Ai and Isabel Cruz give talk at the Great Cities Institute titled "Neighborhood-based Sustainable Food Waste Management" (May 2015)
Three undergraduate students receive NSF REU scholarships to work over the summer on the NSF CyberSEES and Visual Analytics projects: Manasa Bandapalle, Stephen Selke, and Akhil Thuthika (May 2015)
Isabel Cruz gives talk at the Urban Data Analytics/City of Chicago SmartData Platform Workshop at the Computation Institute of the University of Chicago titled "You Cannot Take the Data Integration out of the Analytics (Nor Can You Take the Analytics out of the Data Integration)" (May 2015)
Paper by PhD student Iman Mirrezaei gets accepted (full paper) at the Know@LOD Workshop: "The Triplex Approach for Recognizing Semantic Relations from Noun Phrases, Appositions, and Adjectives" (April 2015)
Meeting between the CyberSEES team and top representatives from the City of Chicago featuring presentations of WindyGrid (by Tom Schenk, CDO, City of Chicago) and of GIVA (Isabel Cruz, UIC) (March 2015)
Isabel Cruz attends NetApp University Day in Sunnyvale, CA (February 2015)
Isabel Cruz becomes Associate Editor of ACM TOIT (January 2015)
Our paper Pay-As-You-Go Multi-User Feedback Model for Ontology Matching is presented by Matteo Palmonari at EKAW in Sweden (November 2014)
Isabel Cruz gives a Civic Engagement talk at the Institute for Policy and Civic Engagement at UIC(October 2014)
AgreementMakerLight is again first at OAEI (September 2014)
Riccardo Porrini, a PhD student from the U. of Milano-Bicocca, is visiting the ADVIS Lab for the Fall semester (August 2014)

My main areas of research are in Database and Information Systems. Some of my particular interests are in the following topics (note about manuscripts here provided and other relevant links):