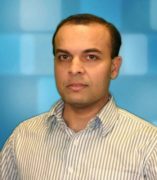 Ajay Kshemkalyani received the BTech degree in Computer Science and Engineering from the Indian Institute of Technology, Bombay, in 1987, and the MS and PhD degrees in Computer and Information Science from The Ohio State University in 1988 and 1991, respectively. He spent six years at IBM Research Triangle Park working on various aspects of computer networks, before joining academia. He is currently a Professor in the Department of Computer Science at the University of Illinois at Chicago. His research interests are in distributed computing, distributed algorithms, computer networks, and concurrent systems, and he has published over 100 articles in top-quality journals and conferences in these areas. In 1999, he received the National Science Foundation Career Award. He has served in various positions (such as general chair, program co-chair, steering committee member, or program committee member) for international conferences such as IEEE ICDCS, IEEE SRDS, ACM PODC, and ICDCN. He served on the editorial board of the Elsevier journal, Computer Networks and IEEE Transactions on Parallel and Distributed Systems. He has co-authored a book entitled Distributed Computing: Principles, Algorithms, and Systems (Cambridge University Press, 2008). He is a Distinguished Scientist of the ACM and a Senior Member of the IEEE.

Contributions to the Public Domain